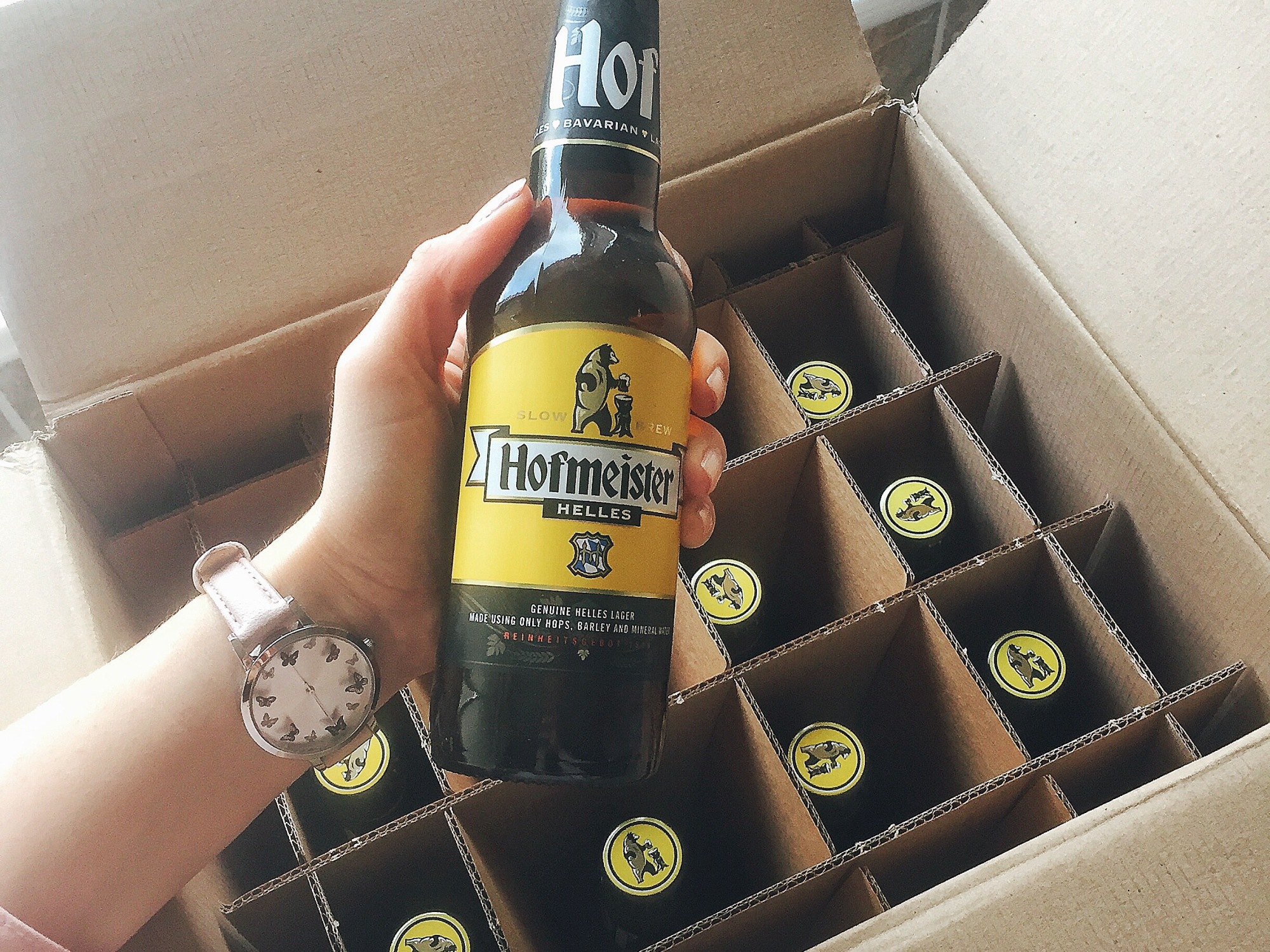 September is passing, the leaves are changing colour and the evenings are getting darker. All over Instagram and twitter right now people are excited for Autumn and Winter. Not me. I prefer long days and bright evenings. Sipping Pinot Grigio in the sunshine. However, as much as I love a crisp fresh glass of dry white wine, winter evenings require something a little different.

Recently I was sent some complimentary Hofmeister helles lager* to review and here is how I got on.

First, a bit of background in terms of my beer experience. I feel that this is important when reviewing as my personal experiences and preferences with beer may be different to a lot of people, so the better you understand my beer preferences the more useful this review will be to you.

In 2013 I moved to South Korea to teach English for a year. However, it was also a whole year of eating out. I would eat out five times a week, minimum. It was just the way there. Eating out in Korea mainly consists of all sitting around an indoor BBQ and sharing lots of meats and side dishes. The bill would always get split between the number of people at the end so if you wanted your moneys worth you had to be a quick eater. I had a lot of male colleagues to begin with and I was definitely paying over the odds for my share – not that I would ever actually make a fuss about this. This is how I ended up drinking beer (more specifically, lager). It was always part of the bill. So rather than sit and sip on water/fizzy drinks (wine was never served with Korean BBQ) I decided to give a domestic Korean lager Cass a try. Before it even touched my lips I was warned that it was just a cheap lager and there was nothing special about it. I couldn’t not disagree with that statement however, I found it so refreshing and began to associate it with Korean BBQ from then on. Even now, if I visit a Korean BBQ in the UK I will try and order Cass or another domestic Korean beer. Fast forward two years to 2015 and I visited an ice bar in Amsterdam where they were serving up ICE COLD Heineken in ice glasses. I had a new favourite. Now if I’m buying beer to drink at home, or in the airport before my next adventure I will choose heineken if it is available. So that’s just a little insight into my ‘Beer Experience.’

When my case of Hofmeister arrived I was so excited to try it. It was a Wednesday. We do enjoy the odd “Wine Wednesday.” But it doesn’t always have to be wine. We had also planned to order pizza in that night so I felt that this was an idea combination.

I began by popping two in the freezer as we didn’t have long until the pizza would arrive. I took out another bottle to check out the packaging properly. Coming in a standard style beer bottle I found the packaging originates from quite a traditional beer design yet has a contemporary feel to it. The bright yellow helps it stand out and the bear gives it its own slight quirkiness. After ten minutes or so I took them out ready for the taste test.

I had my first sip and straight away established that it was crisp and not too gassy. Very refreshing. It had a beery taste (yes yes as you would expect from beer) but at the same time you could almost taste the freshness of the water that had been used to make it. Perhaps that’s a bad sign for a beer? But I enjoyed that aspect of it. It was definitely a crowd pleaser as D enjoyed it too and cannot wait to order another crate.

Hofmeister Helles Lager is a Bavarian beer. Before tasting I headed over to their website to see what they had to say about it. I found it quite interesting that it is made with only three ingredients – water from an underground lake, locally grown barley malted in their own malthouse and HOPS from the Hallertau region. The reason for only using three ingredients is that they like to make and brew their beer by sticking to the 1516  Reinheitsgebot Beer Purity Law.

By reading up about it I also discovered that it is slow-brewed which I guess explains why it is a lot less gassy than some beers. The ingredients and process used to make this beer also mean it is vegan. Now I am sure there are a lot of beers out there that are in fact vegan but I thought this was quite a fun fact about it!

Now as I write this review, we have only one bottle left. So there is going to be a fight. But we loved it so much we are definitely going to be ordering some more. After a bit of research I found out you can buy it here http://bit.ly/buyhofmeister

It comes in at around £22 for a box of 12 which makes its price similar to that of Brew dog. I would say it is worth it!

(* Hofmeister lager was sent to me for the purpose of reviewing. This is post is my honest opinion of the product )