The rain is back. The lovely grey, drizzle that we all love to see in Glasgow. Just a little hint of sarcasm there as you can probably tell. What better way to brighten up a grey Sunday in Glasgow than head Southside for a spot of brunch. The plan was to head to Potluck or Gnom, and I was willing to leave it up to fate to decide for me (we all know how much I hate decisions). I’ve really wanted to try both for a while, but as I say, I left it up to fate to decide in that we would go to whichever had the shortest queue on this particular day.

As you’ll be able to tell from the title of this post we ended up at “Gnom.” Confession: I’ve never been lucky enough to try the delights of the streetfood vendors “Compsky” whom “Gnom” is the brainchild of. After hearing such great things about Chompsky, when Gnom opened up and I saw the menu, I knew this was definitely a must try!

We certainly were not disappointed. We had to wait a while for the table, but the staff were so friendly and kept checking that we were OK, assuring us that it wouldn’t be much longer. Naturally, I look like I’m scowling when I’m in fact content (trying to keep that polite as you never know who may be reading), so perhaps this was why they kept checking on us. Or perhaps, they just care about their customers. I could not fault the service from the get-go. This was a good sign for what was to come.

We ended up ordering before sitting down as our server could see a free table by the window was imminent. D went for the Ham Hock, whilst I went for one of each of the Breakfast Bao. When the server pointed out that I could have one of each, as you would expect, it took me a moment to decide if this is what I really wanted. I originally was going to stick with the crispy pork belly version but I am now glad that the choice of having both was pointed out to me. 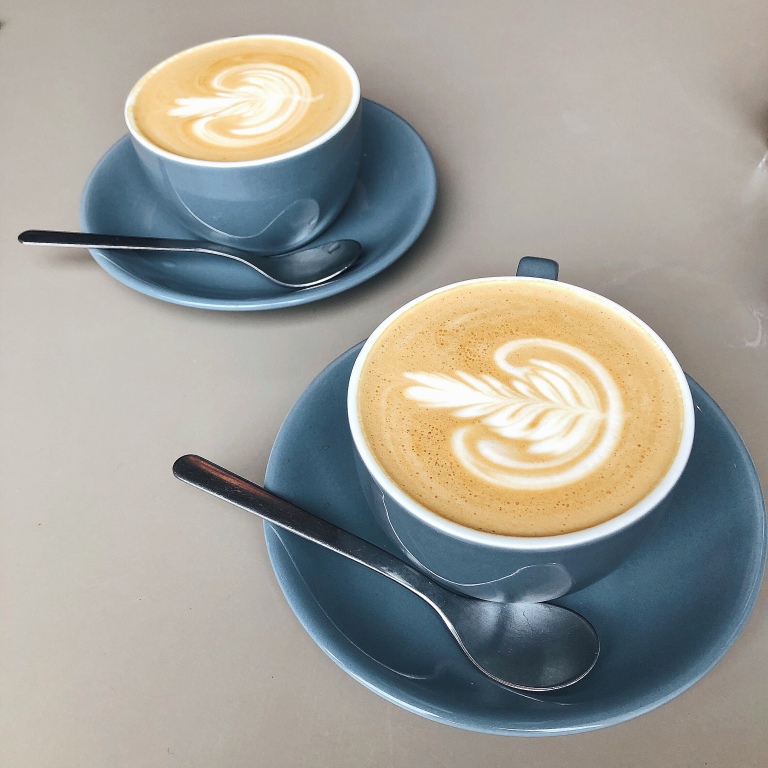 Our coffee was served pretty quickly after we sat down. We both had a flat white at £2.60 each. The coffee was served in cute little blue cups and had a very smooth taste. I forgot to ask who supplied their coffee, however, I’d be quite surprised if it wasn’t local seeing as there are so many great coffee suppliers to be found in Glasgow. 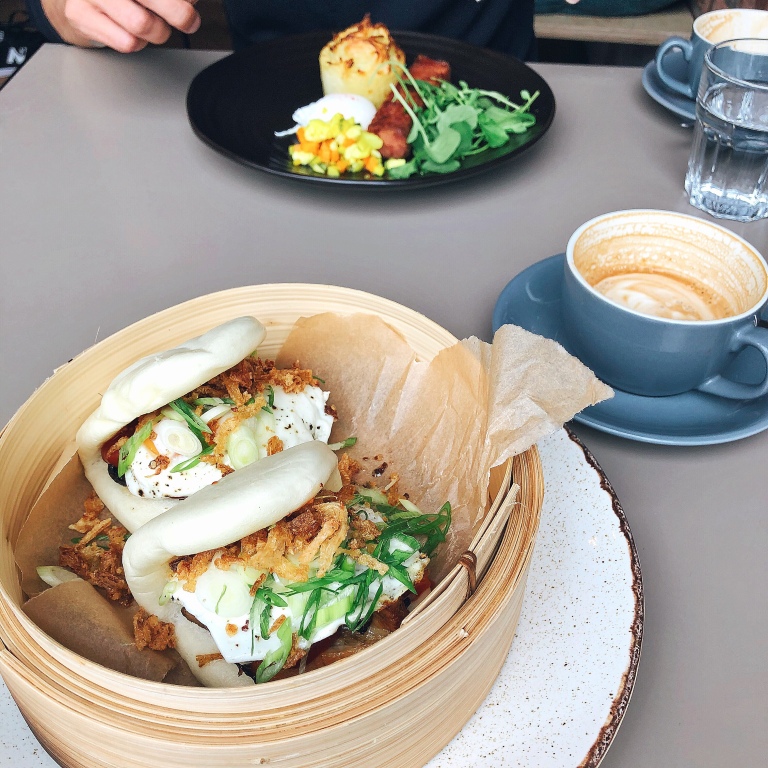 Now to chat about the main event. I decided to tuck into the Mushroom Bao Bun first. When ordering, before knowing I could have both, I was going to order the Crispy Pork Belly, so my theory was to save the best until last. When tucking into the mushroom I instantly thought how is the pork belly going to live up to this. The mushrooms were packed full of flavour and extremely succulent. The egg was not too well-done meaning that the yolk, gochujang ketchup and glazing on the mushrooms all mixed together in perfect harmony. Thinking about it now makes me want to eat it all over again. I was surprised by the mushroom which meant that the pork belly I had set my sights on early doors, now had a lot to live up to. As most of the ingredients are the same the flavours were very similar. The pork belly added another dimension. It was crispy around the edges but as you bit into it, it pulled away nicely to then melt in your mouth. Exactly what you want from delicious pork belly.

When I see Bao buns in photographs they just don’t seem that big. When these were served to me I questioned my ability to finish them. It was the perfect serving for a Sunday brunch. I could have eaten more but that would have simply been greed.

I can’t really comment on the Ham Hock as I was too busy devouring my buns when David eventually offered me a forkful of ham. I can say it looked good though and he expressed plentiful amounts of satisfaction throughout.

In total the bill for two mains and two coffees came to £22. I would say this very good value as everything was fresh and the service was delightful.

Get yourself to Gnom ASAP and make sure you let me know what you think.

One thought on “Gnom Bao Buns”